AND THE WINNER IS…DA VINCI’S DONUTS! 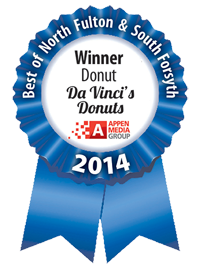 Da Vinci’s Donuts is proud to announce that we have been named The Best Donut in North & South Fulton County by Appen Media. In addition, we have been named as the Runner-Up in both the Best Bakery and Best Dessert categories. With nearly 4,000 votes cast, the results of the 2014 Best of the Best contest were announced at the end of November at Appen’s annual gala. “It is truly an honor to be recognized in our community. We couldn’t be happier or more proud to be a part of this amazing community”, offered Alpharetta Da Vinci’s owner, Melissa Rudd. Hundreds of guests representing local businesses came to the Metropolitan Club on Windward Parkway in Alpharetta for the second annual event.