During an impromptu babysitting session, I began talking donuts with my young companion, Timmy. I may have pushed the conversation in that direction. No matter what anyone says it is not an obsession, it’s not. I found that he had a unique outlook on the creation of the donut.

I do not in any way support or deny the claims made by this adorable child.

Donuts grow on trees and mini donuts grow on bushes. They fall when they are ripe. I understand this logic. They are called Do-nuts after all. 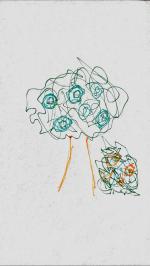 They grow next to the mumrathsin the borogrove.

Then a squirrel collects them and hides them in trees. I asked if the squirrels hid the donuts in donut trees and Timmy replied with the word no and a look that seemed to question the functionality of my brain. He followed it up with, “That would be stupid!” I took his criticism and allowed the story to move forward.

Half human, half hotdog, half squirrel

I thought it would be the squirrel’s semi-human terrifying face that would bother me but over time I was bothered by the ideal of a squirrel shoving m food in its mouth, running up a tree and hiding it in a hole full of bugs. This is why grownups make your food.

Then people search the trees for the hiding places of the squirrels and steal the poor squirrel’s donuts. Yes he used that word, “People steal donuts from the squirrels.” Timmy apparently thinks that humans are jerks.

Finally, once all of the donuts have been stolen and all of the squirrels are sad. The Donuts are taken to donut shops like ours to be sold to smiling people, looking for delightful treats that are free of squirrel hair and tree bark.

We guarantee that our products have little to nothing to do with squirrels. If you come down toDa Vinci’s Donuts you can have a seat in our café and enjoy your coffee whether you are a horrifying blob person or not. We don’t judge.