The Six Weirdest Donuts from Around the World

The donut and its' many variations have been circulating the world for centuries. It seems that if something exists in a vaguely, food like, form, people will put it in or on a donut. I won’t lie to you, most of these donuts don’t come from the US but that kind of diversity in flavors and ideas is what makes this big, blue marble interesting. Some of these may repulse, others may intrigue, but they all top the chart of Da Vinci’s weirdest.

A donut made from meatloaf should be at the number one spot on our list but because this donut was designed as a prank, we decided it was disqualified from the top ranking. The peak of our list is reserved for donuts that people purchase, willingly. These deceitful rings of peppered meat, are iced with a combination of cream cheese and mash potatoes. As an April Fool’s Day prank, they are brilliant but as a donut they are a crime against pastrydom. 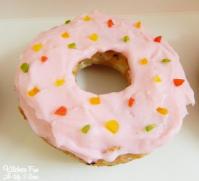 We won’t share the recipe because we can’t officially condone giving these to your friends and coworkers but should you decide to unleash this upon the innocent, a business box from Da Vinci’s Donuts may smooth over the aftermath.

Do you remember the morning that you rolled out of bed with a craving for fried eggs and coconut? If you hail from Thailand you may have. Khanom Krok comes in many variations, from eggs and coconut to tapioca, rice, coconut milk and spices. Usually cooked by street vendors, Khanom Krok takes its name from the pan that fries these spongy cakes to a golden brown disk or muffin shape. 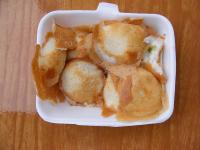 I think it moved!

Some call them cakes, others deem them a pudding but we call them donuts because donuts are our thing. Don’t let American sites mislead you, if you aren’t having these street side, after they’ve been cooked over charcoal in an iron pan, you haven’t had the Khanom Krok experience.

Hair is nice to have, duct tape is a must and when your breath gets offensive, gum is a fast and effective remedy. Like these three, many things are terrible once combined. This brings us to the wasabi or seaweed and cheese donut. 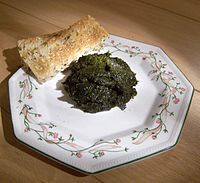 Wasabi peas are good snack and healthy to boot. Cheese seems to have some kind of hypnotic power over most humans. Sea weed makes for good sushi. Donuts are our livelihood. Why someone in China decided that these three flavors should be smashed together into one object is beyond our understanding. We come up with some odd combos in the café but nothing like this. If you are willing to tackle this adventure, more power to you. We’ll be here, making nonthreatening food. This will not be the last time that seaweed appears on this list.

When I read about this one, a helpful bystander doused me with ice water to bring me out of shock. Not everyone knows what Kimchee is so let’s start with that. We have no problem with Kimchee. It is Korea’s national dish and it has definite appeal as a spicy or sour dish made from fermented napa cabbage, radish, scallion, or cucumber. It appeals to anyone who is a fan of sauerkraut or many variations of pickle. 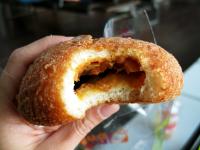 Again, some things do not belong in combination. If you’d like to bring your own fermented veggies to Da Vinci’s, that’s up to you but we likely won’t be keeping them behind the counter. We would also ask that you eat your kimchee donut outside, out of respect for our other guests. We won’t judge you, if we don’t smell you.

Seaweed makes its triumphant return with a new contender, dried pork. We have bacon behind the counter -more on that later- and we can understand the appeal of a sweet and savory combination but the addition of seaweed takes this to a whole new level of adventure.  Should you decide to go down this road, bring a friend, you may need a spotter.

Seriously, NO ONE wants to see this one! Yuck!

Is this number one because of the strangeness of its ingredients, its oddly diverse color or the onslaught of different textures? All of those are good reasons but this is number one because it was made under our own roof. A donut was placed on the counter and iced with coffee and chocolate. Chocolate and coffee, so far so good. Fruity Pebbles were added as a topping and bacon topped the topping. Finally, a Lime drizzle adorned the kaleidoscope of flavor. 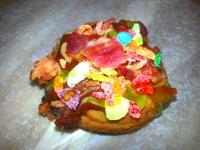 This was either lunacy or the most efficient breakfast ever created. Why go through the trouble of making cereal, bacon, coffee then cutting up fruit and picking up a donut, when you can just get it all in one item.